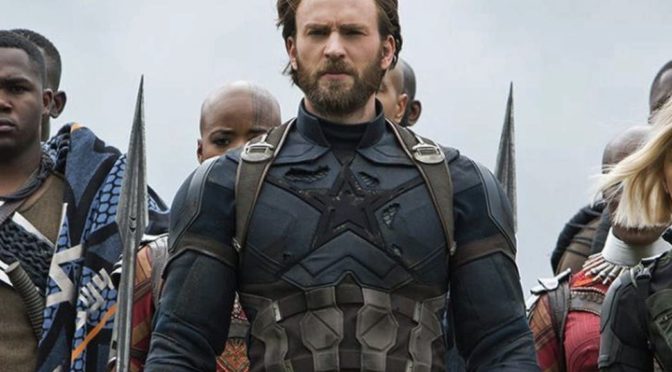 From sea to shining sea, everyone knows of the Living Legend and his heroic exploits. But how did a simple soldier become an enduring symbol of courage, idealism, and morality? We offer a brief look at the star-spangled hero’s spiritual journey, and a glimpse of where Cap will be heading in the years ahead.

Night in the city. Somewhere in the cavernous depths of Manhattan, three figures in black slip quietly down an alleyway. They are young, barely out of their teens, and their intentions are undeniably criminal. Suddenly, the bright gleam of metal shatters the darkness, and a spinning disc—red and white concentric stripes, a white star emblazoned in a blue center—caroms off the nearby wall, sending two of the interlopers diving to the ground. Sparks fly as it rebounds off brick and concrete, rendering the fleeing third figure unconscious before he even hits the ground. As the disc bounces off the asphalt into a red-gauntleted hand, one of the hoods looks up with fearful eyes. He recognizes the proud shield and its owner, and he knows their plans have been foiled. A confident voice emerges from the shadows, calming and yet commanding at the same time. “Isn’t this a school night, son?” he quips as he steps into the light, and his brightly colored red, white, and blue garb signals the triumph of order and justice. He is the Living Legend of World War II, the Sentinel of Liberty, the real American hero—he is Captain America.

BY THE DAWN’S EARLY LIGHT

Captain America was born in 1941 amid a storm of patriotic fervor and righteous indignation. The United States, eventually forced to acknowledge the world at war around them, joined the fray by the end of that year determined to defeat the Axis powers. But even before that, characters throughout film, radio, and print were used to rally the American fighting spirit, and from that fictional crowd emerged a new hero, a soldier destined to become a legend in his own time. Captain America was actually Steve Rogers, an ordinary man who dreamed of serving his country. Too weak and scrawny to be a soldier, he was offered the chance to participate in a government project designed to create a new breed of “super-soldier.” Emerging from that experiment with enhanced strength and stamina, and still possessing the same purity of spirit, Rogers became America’s newest secret weapon. Co-creator Joe Simon credits Cap as being the first human Marvel hero. “He wasn’t a big gun-toter, but a common man, a soldier,” Simon says. “He was a perfect hero.” 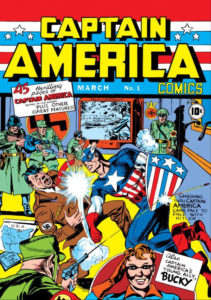 Cap’s early adventures were dominated by “Ratzi/Jap-bashing,” as Cap and his sidekick, Bucky, laid into the soulless monsters who threatened democracy. It was a simpler time in many respects; a time when good and evil were clearly defined, and young Americans could innocently thrill to the exploits of their hero as he decimated the enemies of freedom around the globe. Against such foes as the deadly Red Skull, a Nazi agent who served as one of Hitler’s weapons in the war against the Allies, Cap and Bucky were shining examples of American guts and determination; the Axis never had a chance, and we knew it.

He was a perfect hero.

The fiercely patriotic slant that colored most of Captain America’s early stories continued when a ’50s revival pitted Cap and Bucky against the “Commies.” As before, some of the attitudes and posturing were politically incorrect by today’s standards, but this was just another rallying cry for young Americans, enlisting their support in the war against foreign invasion both physical and ideological. Captain America took the fight to the enemy, and the country’s sovereignty and stability were safe again. 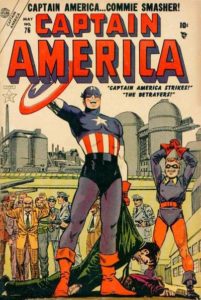 Eventually, as the urgency of Nazi and Communist aggression receded, Captain America was left without a crusade, and his star faded into obscurity. In comic book terms, Cap was frozen in suspended animation at the close of World War II, and the 1950s-era Cap and Bucky would later be revealed as brainwashed impostors, but of course, that was mere editorial tap-dancing. The country had simply grown out of its need for a flag-waving hero, at least temporarily. Like the mythical King Arthur, Captain America slept, ready to awaken and take up his shield in the time of his country’s greatest need. That time was quickly approaching.

WHAT SO PROUDLY WE HAILED

By the 1960s, the dawn of a new heroic age in comics had begun, and the time was right to reintroduce a legend. When Captain America was discovered in a block of ice by the Avengers and revived, he found himself in a world very different from the one he left; a world, not of black and white, but of shades of grey, where good and evil were not as clearly defined. 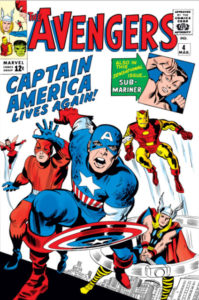 The Vietnam era was consumed by quite a different conflict than those plaguing the America of the ’40s and ’50s. With young and old locked in an ideological war of words, the United States was not a homogenous bastion of patriotism, spearheading the cause of freedom and democracy in far off lands. Vietnam pit generations of Americans against each other, and the war was waged on the home front as well as abroad. Into this new battle, Captain America walked alone, taken in by his Avengers compatriots and forced to adjust to an America that had forgotten the simpler values. His sidekick Bucky had been lost in World War II, laying down his life for his friend and his country, and that too was a loss that Cap had to bear. Despite these hurdles, Cap never swayed from his devotion to his native land, and within a few short years, Cap evolved from a war-time relic into the absolute moral center of the Marvel Universe.

Cap evolved from a war-time relic into the absolute moral center of the Marvel Universe.

Virtually every other hero looks up to Cap, not just as an ideal example of true heroism, but as a father figure. Perhaps because of Bucky’s tragic death, Cap has often seemed not only like a man out of time, but a teacher without a student. To fill the void, other heroes have learned from his experience or tried to take up the challenge of being the Living Legend’s partner. Temporary compatriots like Rick Jones, the Falcon, and Diamondback reinforced the idea that Cap was more than just another hero—he was a mentor and guide, with a wealth of knowledge and wisdom to impart. Even mavericks like Spider-Man have sought Cap’s advice, which is always administered with the easy manner of a man who has seen it all and still believes. “What seems to be the problem, son?” he might ask Spidey, although he can’t be more than five years older (physically) or so than the web-slinger. The father-son roles are clear and silently understood.

THROUGH THE PERILOUS FIGHT

Throughout the ’70s and ’80s, Captain America was regularly faced with tests of his faith and courage, but through it all, his purity of spirit and strength of will remained constant. In clashes with his arch-enemy, the Red Skull, who tried to defeat Cap with weapons like the Cosmic Cube or accelerated aging, our hero was steadfast and won the day. Even after his brief sojourns as Nomad and the Captain, periods in which he was either inspired or forced to abandon the mantle of Captain America, he always returned to that identity with an even greater sense of purpose. 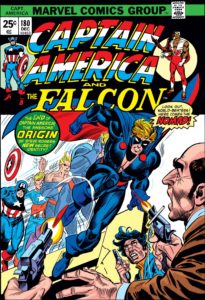 Perhaps the most important stabilizing role Cap played in Marvel history, and the one that cemented him as guardian of Marvel morality and heroism, is as chairman and leader of the Avengers. Having joined the group after its initial creation, Cap was left by the founders—Iron Man, Thor, Ant-Man, and the Wasp—to run a team comprised of largely untried misfit heroes, namely Hawkeye, Quicksilver, and the Scarlet Witch. Clearly, his suitability as a team leader was already in evidence, and in short order, he swiftly established himself as arguably the most accomplished and tactically skilled combat leader in comics.

Cap always returned to that identity with an even greater sense of purpose.

“When I saw him turn three of the most down-and-out rogues into Avengers…heroes who could meet any challenge…I knew Cap could achieve miracles,” Quicksilver himself commented in the pivotal Captain America #444, written by then series scribe Mark Waid. “Cap was our tactician. There’s always a way, and Cap could find it,” Black Widow noted, and indeed, even when he wasn’t holding the actual title in the Avengers line-up, Captain America has always been the de facto leader of the team whenever he is present, the man who symbolizes the Avengers spirit. All others defer to his judgment and tactical strategy. Even gods like Thor and Hercules, beings who supposedly possess millennia of combat experience, follow Cap’s orders and would fight by his side to the ends of the universe. His voice has been described as powerful enough to command the gods. “On Olympus, we measure wisdom against Athena, speed against Hermes, power against Zeus,” Hercules said. “But we measure courage against Captain America.” 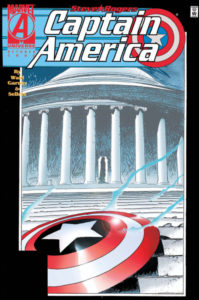 “The ongoing struggle with writing Captain America,” observes Waid, “is to make such a morally upright character relevant to a generation of kids who have to go through a metal detector to get into school. For young readers, I see Cap as a line of defense in an otherwise hostile world. He is very literally a shield.” Cap has been repeatedly defined through his actions as a man of duty and honor. Waid in particular has not only reaffirmed Cap’s legendary status, but found new ways to reflect the ideals and values that lie at the heart of the American dream. Although another famous hero lays claim to the notion, Captain America is the only real crusader for truth, justice, and the American way. “Superman by nature of his own humility cannot understand his importance in the world,” Waid notes, “but Cap can’t be that naive about it. He is something that Superman never was; he is a teacher. He’s taken all these heroes under his wing over the years, and he can’t help but realize the impact he has on his peers.”

Captain America has certainly come a long way from the Ratzi-bashing soldier of WWII. As the country has changed with the times, maturing through conflicts that blurred the line between right and wrong, Cap has never wavered from his duty and beliefs. He may only be a creation of paper and ink, but this simple comic book character has become a powerful American icon embodying very real values. No matter what choices are made—whether Cap leads or follows, whether he works for his government or against it, whether he wears wings or the proud “A” on his cowl—Cap will always remain loyal to the ideals and morals we all cherish, symbolizing the American dream of liberty and justice for all.

“I don’t think Captain America is ever going to die,” Simon says. “He’s unblemished, pure of spirit. He represents the father figure, Jesus Christ among the superheroes.” Waid agrees. “He’s more of a legend than ever. He’s a humble guy who believes that anyone with the suit and the serum could do the job, but to the world, he’s like a god.”

Captain America has overcome many obstacles in his never-ending battle against evil; he has returned from oblivion itself to fight for his country and people. With the support of writers like Joe Simon, Mark Waid, their successors, and millions of dedicated fans, the Living Legend is ready to carry that fight well into this millennium. For as long as comic book readers young and old thrill to his exploits, Captain America will serve as a shining example of the best in all of us, and the kind of human being we all aspire to become. 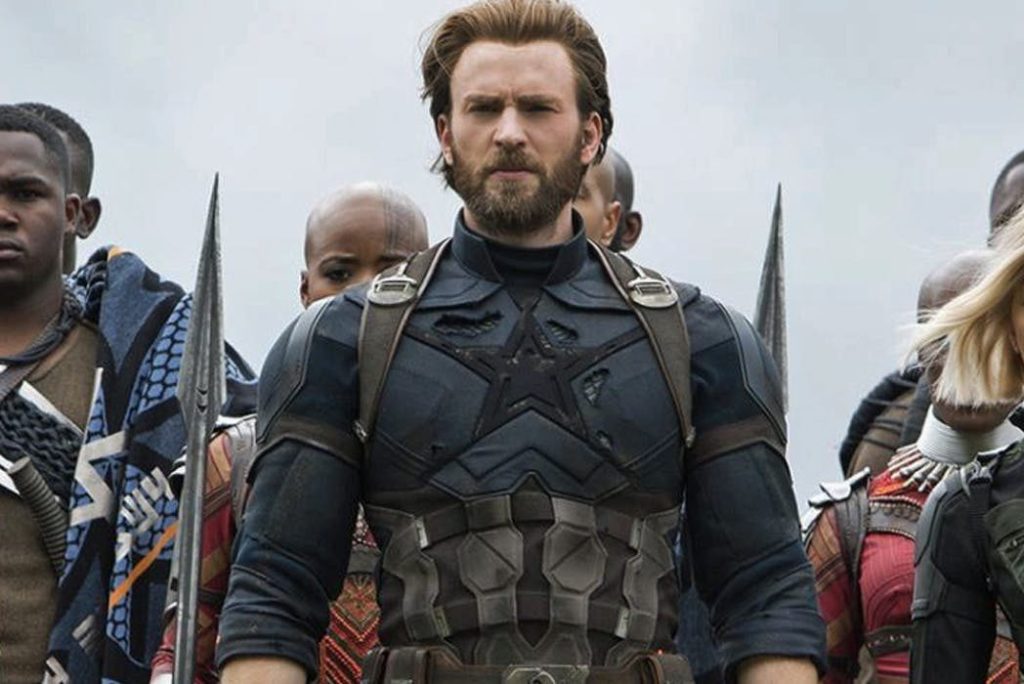