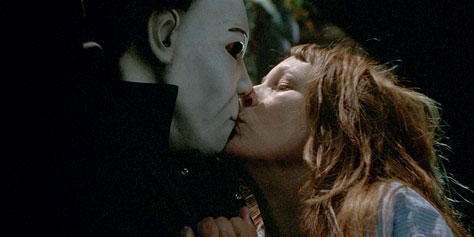 After a prologue that provides a final, epic farewell to Jamie Lee Curtis’ Laurie Strode, we move on to Haddonfield, where Freddie Harris (Rhymes) is about to present a new Internet-based reality program dubbed “Dangertainment.” Lock the usual assortment of attractive young people in the Myers house, strap webcams to their heads, and let the fun begin. Oh, did I mention Michael has come home again? Oops. Bet nobody had him sign off on this production.

I won the scorn of many colleagues when I confessed to actually enjoying this 2002 installment in the slasher franchise. Yes, the Michael Myers seen here is a pale shadow of the Shape we once knew; yes, it makes Busta Rhymes a more imposing presence than Myers, to the detriment of Michael’s stature as the series’ indestructible juggernaut; and yes, it won’t win any awards for plotting or performance quality. It’s a less than ambitious entry in the series and middle-of-the-road horror fare for a more conservative era.

It’s a less than ambitious entry in the series and middle-of-the-road horror fare for a more conservative era.

But hell, it’s also a pretty decent HALLOWEEN sequel when your expectations are suitably lowered, and sometimes you have to evaluate a film within its own narrow category rather than relative to the vast universe of cinema in general. When compared with the lethargic 20th anniversary entry, RESURRECTION at least gets down to business with some old-style Myers murders (Tyra Banks’ demise, regrettably, happens off-screen), a decent level of suspense, and even some welcome continuity touches that have been absent from the series for a long time. Anyone remembering the sudden reality shift in HALLOWEEN 5 when the old Myers house became a Gothic-style cathedral-like edifice should have no problems here. The Myers home not only serves as the central location for most of the action, but it looks almost exactly as it did back in 1978. Good show, set designers.

The premise is marginally clever as well, taking advantage of the slew of reality-based shows on TV then (and now) and incorporating aspects of the growing Internet culture and the “found footage” genre. True, some fans might question why Michael is driven to continue his rampage at all now that his last remaining relative is gone in the first fifteen minutes, but to hell with logic. For a series with two distinct continuity threads, who needs consistency? At least Michael, played here by Brad Loree, recaptures a bit of his trademark body language, and the mask is not at all bad. Michael even shows a wry sense of humor by presenting his bloody knife as a collectible trophy to a mental patient obsessed with serial killers. What a nice Shape he is sometimes.

Our new Laurie stand-in, Sara (Kajlich), is pretty flat, but then so was Laurie. Come on now – the HALLOWEEN movies were never about brilliant acting anyway. The rest of the cast dies well enough, and Busta emerges as one half of a heroic team – the other being Sara’s Internet and Palm Pilot chat pal ‘Deckard’ (Ryan Merriman) – that gives Michael a definite run for his money. And once again this brings us to the issue of the HALLOWEEN series’ recurring problem with endings.

At least Michael, played here by Brad Loree, recaptures a bit of his trademark body language, and the mask is not at all bad.

In the theatrical cut of the film, it’s Busta that wipes up the floor with the Shape. This is director Rick Rosenthal’s second shot at a HALLOWEEN film after the legendary near-disaster that was HALLOWEEN II, and once again he was subject to a lot of last-minute tinkering in the editing room. In the original ending, it was Merriman’s character that arrived to save the day, but test audiences demanded that Busta survive and save the damsel in distress instead.

Either way, we all know damn well that Evil never dies, but this is the end for the original HALLOWEEN series. After eight films and two storylines, the decision was made to hand the character to filmmaker and musician Rob Zombie to reimagine for a new era. But perhaps some night soon, the one true Shape will come home again…