Arnold and Natalie are back! They talk about the making of Arnold’s new massive tome on zombie cinema, JOURNEY OF THE LIVING DEAD, which kept them away from the podcast for most of 2018, then dive back in with a chat about early Halloween shopping and three films: ZOMBI 3 (1988), HOCUS POCUS (1993), and THE HAUNTED PALACE (1963)! It’s a treasure trove of terrors in this all-new DOCTOR OF THE DEAD podcast, so dive in like Uncle Scrooge and get started!

The MARVEL CINEMATIC UNIVERSE REVIEW is back after three years! Dr. Arnold T. Blumberg, the “MCU guru” and professor of the world’s first MCU college course at the University of Baltimore, is joined by Scott Collura from IGN.com and the TRANSPORTER ROOM 3 podcast to talk about the tenth anniversary of the MCU and the might and majesty of AVENGERS: INFINITY WAR! If you’re one of the lucky ones left in the half of the universe that didn’t get obliterated, listen in True Believer!

Can a mother’s love surmount the barrier between life and death? Christine Brooks (Lynn carlin) wishes her son Andy (Richard Backus), a soldier in Vietnam, would return home, and lo and behold he does. But Andy isn’t the pleasant, gregarious soul he was before the war. He stays alone in his room; he doesn’t eat or drink. He has an accelerating skin condition that he only just manages to hide from the others. Oh, and he has a thirst for human blood, the only thing that can arrest the decay that seems to be consuming him. The war has done something to Andy, something that can’t be undone. A mother’s love may not be enough to keep him from an overdue date with destiny and the cold, dark embrace of an overdue grave… 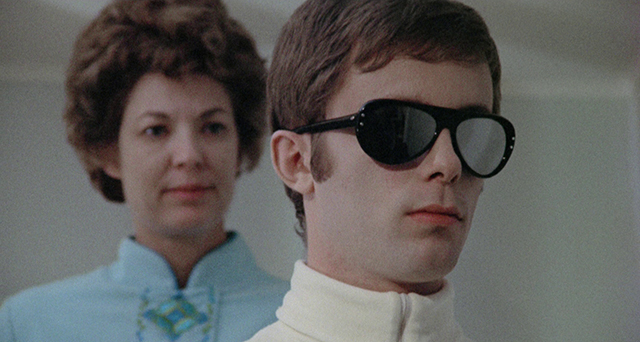 In the old days of late-night viewings and VHS rental shops, you may have encountered this film as any of the following: DEAD OF NIGHT, THE NIGHT ANDY CAME HOME, NIGHT WALK, and so on. These days, we’ve all settled on DEATHDREAM, and with this latest stunning release by the good folks at Blue Underground, the film – no matter what its title – should enjoy its rightful place in the annals of zombie and horror cinema as a watershed moment in the development of practical makeup effects as well as a deeply meaningful commentary on America’s problematic relationship with its own combat-scarred veterans.

Basically an extended riff on W.W. Jacobs’ classic 1902 short story, “The Monkey’s Paw,” DEATHDREAM is a far more effective chiller than its simple origins suggest. Not only is it a none-too-subtle commentary on the punishing psychological damage of war and the empty life that many Vietnam vets faced when returning home, but it’s also a very well-acted, eerie horror movie regardless of its strong socio-political statements. Andy (a tour de force performance by Backus) spends most of the film in a near-catatonic state, sleepwalking through a parody of his former life, presumably sustained in his present form only by the fervent wishes of his mother. When he does emerge long enough to exhibit any emotion, it’s a highlight of the film, from his slow burn as the mailman natters on (a delightfully annoying turn by Arthur Anderson), forcing him to explode in anger, to his delightfully sardonic repartee when responding to Bob (Michael Mazes) during the double date.

There’s a barren quality to the film that echoes Andy’s own state of mind, as well as a great score by Carl Zittrer enhanced by a seething, goblin-like voice that whispers Andy’s name and a motif that sounds like a piano string being scraped, all of which add to the overwhelming sense of tension in the film. You can’t help but feel your skin crawl as the poor guy succumbs to his vampiric (yes, I admit that) Bathory- and MARTIN-esque hunger for blood. While Andy struggles with what he has become, only revealing the true depth of his turmoil in a few choice moments, like his brief conversation with the doomed Dr. Allman (Henderson Forsythe), his family barely holds their own fear and anger in check, and there are obviously plenty of issues that were there long before a re-animated Andy came home, especially between Andy and his father (John Marley, who will always be remembered as the foolish Hollywood producer, Jack Woltz, who dared to stand up to Don Vito Corleone at the beginning of the first GODFATHER and had the head of his prized horse put in his bed to teach him a lesson. Fun story: Marley thought this movie was about his character and not Andy!). 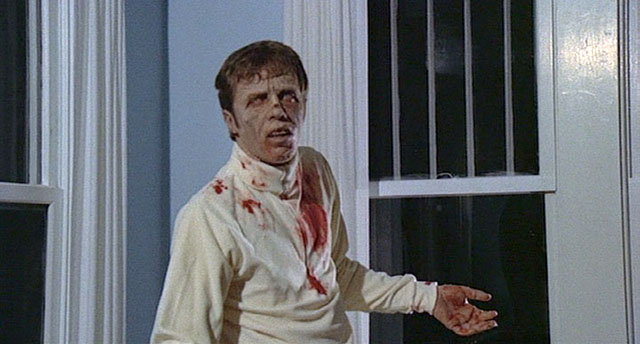 For students of the zombie genre’s history that haven’t yet experienced DEATHDREAM, the film has some eye-opening connections to past and future horrors, such as POV shots of a house that look quite similar to those in John Carpenter’s HALLOWEEN; you know, the movie that bore the familiar tagline, “The Night He Came Home?” Hmm. As Andy begins to exhibit more overt physical signs of decay, the film takes a drastic turn into the truly macabre, with a final undead look that rivals PLAGUE OF THE ZOMBIES for “Eeriest Zombie Face Ever.” While script writer Alan Ormsby (CHILDREN SHOULDN’T PLAY WITH DEAD THINGS, SHOCK WAVES) also oversaw the makeup effects, he did bring in a young man named Tom Savini to assist, thus launching Savini on a legendary career in horror that would also shape the success of several other films we all know very well indeed. And if you want an amusing non-horror link, Andy’s mailman says “I’ll just be double dog damned,” a phrase we all know well from annual marathon of director Bob Clark’s holiday classic, A CHRISTMAS STORY. 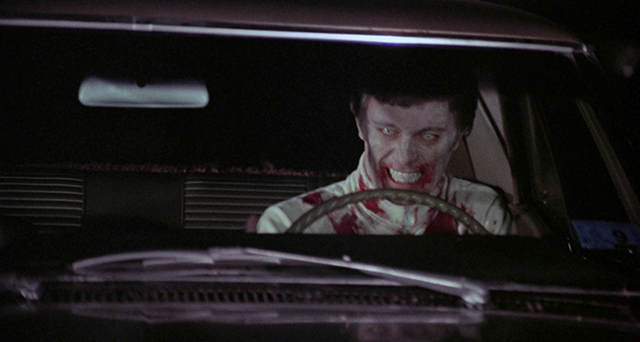 Clark’s untimely death in 2007 put at least a temporary end to then-developing plans for a remake, but perhaps one day we’ll see a 21st century take on this story. In the meantime, the original is itself timeless in its scathing treatment of the ways in which we callously discard those that gave everything to safeguard our freedom, including an obvious drug addiction metaphor complete with “tripping” sequence. Keep your eyes peeled for Clark and Ormsby in cameos as a cop and a bystander, while CHILDREN SHOULDN’T PLAY WITH DEAD THINGS co-star (and A CHRISTMAS STORY Santa) Jeff Gillen pops up as a bartender.

If the film’s final moments don’t creep you out completely and fill you with an overwhelming sense of pathos, then you’re one of the walking dead yourself. And whether living, dead, undead, or anything in between, you owe it to yourself to get a copy of this definitive release of DEATHDREAM from Blue Underground, which improves dramatically on their already great previous release, and includes so many satisfying commentaries, interviews, and behind-the-scenes extras that offer a complete retrospective on this too-long-overlooked film.

Arnold and Natalie finally get around to RESIDENT EVIL: THE FINAL CHAPTER and tear into that film and its five predecessors like a pack of rabid T-Virus zombies seeking the soft flesh and viscera of the living. Following their rapidly-edited, shaky-cam takedown of that film franchise, they explain why they won’t be watching the rest of Syfy’s CHANNEL ZERO: THE NO-END HOUSE after the second episode. It’s our first new DOCTOR OF THE DEAD podcast of 2018 – Happy New Year!

THE DOCTOR OF THE DEAD’S JOURNEY OF THE LIVING DEAD AMAZON WISHLIST
(Help out the project and you’ll be acknowledged in the book!)

THROUGH THE LOOKING GLASS – Arnold’s Epic Review of the RESIDENT EVIL Film Series (Soon to be updated!)

Arnold and Natalie see out 2017 with a look at the final five episodes of Z NATION Season 4 (as well as an important shout-out to the strange shift in the show’s social media presence), and then sit through a marathon of Xmas-themed horror movies (affiliate links below if you want to help out the podcast) as well as something Arnold defines as the “Second Coming of Horror!” Happy holidays to everyone listening, and we hope you’ll join us next year for many more zombie-laden episodes of the DOCTOR OF THE DEAD podcast!