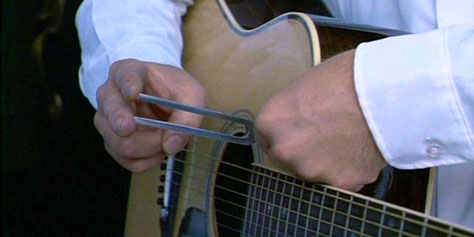 Young Mike (Baldwin) is convinced that something strange is going on at the local mortuary, where the enigmatic and decidedly creepy Tall Man (Scrimm) can lift coffins entirely by himself. Investigating with the help of older brother Jody (Thornbury) and ice cream man Reggie (Bannister), Mike soon uncovers a sinister plot to turn dead humans into zombie dwarf slaves for transport back to the Tall Man’s alien dimension. Or it’s all just a dream; either way, it’s pretty weird.

Forget for a moment that this film went on to spawn four sequels and that it led to further elaboration on the history of the Tall Man (although not much and all of it pretty ambiguous). Just think of it as a one-off experience, which indeed it was when it first came out. Evaluating it purely on its own terms, it’s one of the most effective dramatizations of a grief-induced nightmare ever made. Nothing that happens in the movie is necessarily real, but all of it is certainly creepy and a superb example of low-budget horror cinema. With the recent Remastered restoration in particular, it’s a stunning way to revisit ’70s film making at its most evocative, and that distinctive soundscape – including the incredibly hummable theme song – has never sounded more (ironically enough) real. Even the visuals, which look more vibrant than they ever did when the movie first came out, retain enough of the texture and feel that serves the material very well indeed.

By picking through the clues strewn throughout the movie, we can gather that Mike’s older brother Jody has just died. Suffering from the immense loss, Mike descends into a convoluted series of feverish dreams that mix elements evidently drawn from reality – the graveside service, the funeral parlor, life with Jody and their friend Reggie before the accident – and throws in a few bizarre additions – the dwarves, the dimensional gateway, the flying bug-thing – to create a dark landscape of the mind in which Mike and the audience are trapped.

It’s one of the most effective dramatizations of a grief-induced nightmare ever made.

It’s a nifty piece of work when interpreted in that light, but even if you want to watch it as a straight-forward if surreal story about an alien posing as a funeral director and ensnaring a local boy in a web of intrigue and mind-bending horror – and who wouldn’t when you put it that way? – then by all means feel free. It works on both levels. But really: crushing down and re-animating human corpses, canning them, and then sending them through a dimensional rip in order to provide slave labor for a distant desert world? Doesn’t really sound too cost effective, does it? And don’t you love how quickly our heroes just accept the sheer insanity of the premise with little more than a shrug?

The Tall Man himself, Angus Scrimm, is one of those men whose physical presence is so innately unsettling that he could only have been put on this Earth to become one of our undying icons of sheer terror. The rest of the cast tries very hard, but it may be to Scrimm’s benefit that he has little dialogue and only has to glower menacingly. The others have to tackle actually speaking, and occasionally their acting is rough around the edges. But earnestness counts, and everyone is doing their best to be “in the moment.” Special kudos to Baldwin, who cries on cue, convincingly conveys anger and frustration, and makes me genuinely believe he’s figuring out how to put together his makeshift shotgun shell hammer device in the moment.

But never mind a bit of uneven acting. What makes this movie a classic is its suitably languid pace and visual style, enveloping you in the nightmare world of the Tall Man while one of the eeriest musical scores ever written (by Fred Myrow and Malcolm Seagrave) chills your very bones. The otherworldly hum of the gateway hidden in the funeral parlor is also cause for goose bumps, and there are numerous inexplicable bits and pieces that enhance the dreamscape, like the Jawa-esque dwarf zombies and the cackling psychic lady in shades. Does she know more than she’s telling when she gives Mike a test of bravery that foreshadows Luke Skywalker’s own in THE EMPIRE STRIKES BACK one year later? Could she even be a long-time nemesis of the Tall Man? No answers are forthcoming, at least not yet, and that’s also part of PHANTASM‘s eternal charm. It hints at the edges of a grander saga, a bizarre mash-up of horror, science fiction, action adventure, and family drama, and it manages to keep all those balls in the air (had to, sorry) while never quite focusing in on any single one of them to the detriment of the others.

[This] bizarre mash-up of horror, science fiction, action adventure, and family drama…manages to keep all those balls in the air.

And then there’s the scene I used to consider annoying but now find genuinely warm and pleasant, and that’s Jody and Reggie’s brief jam session on the porch. Sure, they may not quite be “hot as love,” but Phans surely think so. And besides, Reggie’s need to tune up provides a cool if sledgehammer subtle bit of foreshadowing about how to temporarily interfere with the Tall Man’s plans. If you want still more of “Sittin’ Here at Midnight,” you can track down Bill Thornbury’s complete 1995 recording on various DVD releases, as well as the disco version of the theme tune!

PHANTASM is a delightfully dreamy slab of early modern horror with tableaux that stay with you forever, particularly if you saw it first as a child. Could there be anything more terrifying than the sight of the Tall Man standing menacingly at the end of a long corridor with the whine of a silver sphere close behind? After all, you can run all you like, but the game is over boy, and now you die!

HELP US BY ORDERING THE MOVIE – NOW REMASTERED! – VIA THIS LINK!