The popular zombie television series expands into another medium via this new comic book incarnation, co-written by one of the show’s co-creators and preserving the TV show’s irreverent and action-packed approach to the zombie genre. 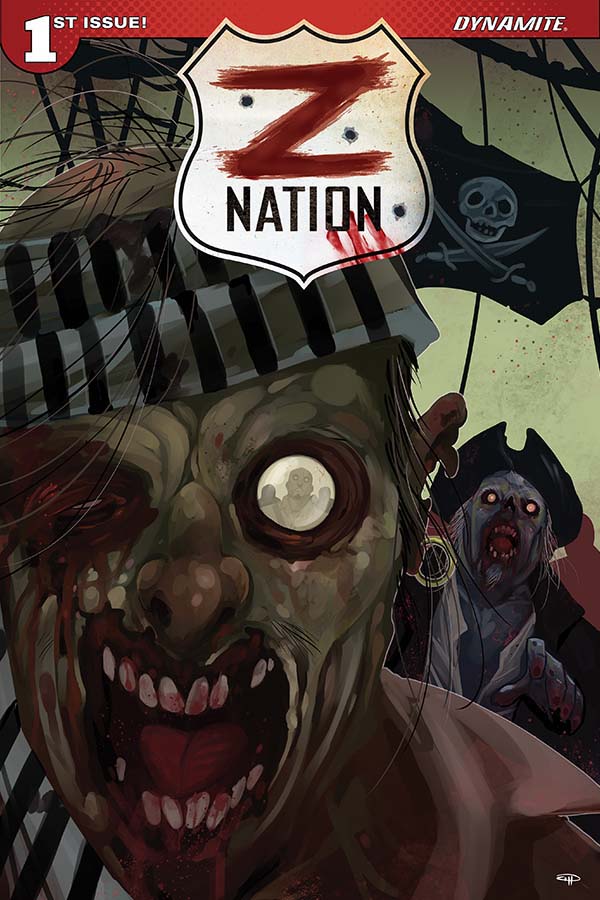 “Sea of Death” takes us to a much earlier point in the Z NATION universe than that seen in the current series (debuting its fourth season this fall), utilizing the medium of comics to fill in a previously unknown chapter in that world’s apocalyptic history. We’re back in Year One, civilization has collapsed, and a National Guard team are dispatched by a very familiar character (you’ll recognize this person immediately if you’ve been watching the show since day one) to obtain a much-needed nutrient known as “Soylent Z.” Naturally, it’s not going to be an easy trip, and things quickly become very complicated. This first issue ends at the docked “Empress of the Seas,” a gargantuan cruise ship whose luck is not likely to be better than the Titanic – but whether it actually sinks or everyone on board just dies is another matter…

This polished debut issue does an excellent job of launching a new adventure while assuring readers that it’s still Z NATION deep down in its mutated DNA.

This fast-paced issue quickly rolls out a new team of characters and sends them on their perilous journey while sketching in their personalities and giving readers a chance to get to know them – all the more effective, then, when some don’t even make it to the final page. There are one or two who just might emerge as this comic’s Murphy or Warren; who knows, perhaps the TV show might even bring a later version of one of these folks onto the small screen! And who’s to say we won’t encounter earlier versions of our favorite Z NATION heroes here as well?

There are some excellent page designs and coloring techniques throughout, from a shadowy sequence in a warehouse of vital supplies, to numerous action beats in which zombies are dispatched in front of orange starburst backgrounds that might even remind readers of the “BAM POW ZAP” moments in the BATMAN TV show. There’s even a character in this story with a very familiar name! Now where have I heard “Blumberg” before, hmm… (and yes, it’s an honor!) 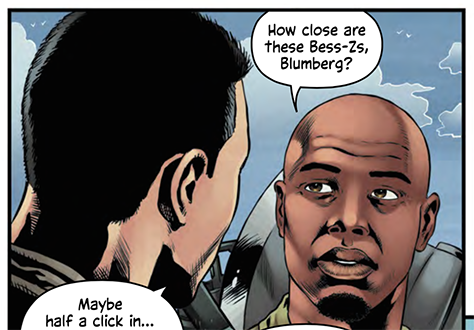 It also wouldn’t be Z NATION without a few innovative additions to the vast zombie mythos, and in this issue alone we’re introduced to a weapon that could give Addy’s Z-Whacker a run for its money, as well as a new zombie species whose natural behavior while alive becomes all the more frightening in unlife. And yes, there are serious stakes, comedic repartee, and even heart-breaking or at least shocking losses.

This polished debut issue does an excellent job of launching readers on a new adventure while assuring them that it’s most definitely still Z NATION deep down in its mutated DNA. I’m looking forward to seeing where the rest of this series takes us; there’s a great deal of potential to tell many other stories in the Z NATION universe, so there’s every reason to believe this comic could run for years to come.

GET THE Z NATION SERIES AT DYNAMITE COMICS OR YOUR LOCAL COMICS SHOP!

It’s “A New Mission” for Arnold and Scott as they return to chat about the big Z NATION Season 3 premiere and the preceding “flashback movie,” the Season 2-era “No Mercy!” Arnold also catches us up on his upcoming October appearances at Walker Stalker Philadelphia and the Living Dead Weekend in Evans City, PA!

Arnold and Scott chat with director Nick Lyon about his new Asylum zombie extravaganza airing on Syfy, ISLE OF THE DEAD! They also catch us up on the goings-on at Walker Stalker and GenCon; it’s an action-packed episode of games, gore, and gab! 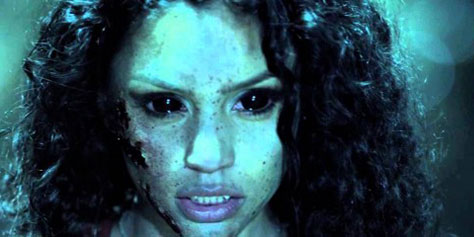 The town of Stillwater is ground zero for an age-old battle between the forces of good and evil. A ferocious and bloody attack on the eve of a major changing of the guard in werewolf world also heralds the passing of the torch (or Arthurian sword and cape) from one fearless protector of humanity to another, but the transition does not go smoothly. As the embattled Sheriff (Eric Balfour of BUFFY and HAVEN) tries to hold things together, a resurrected “crexy” zombie girl (Bianca Santos of THE FOSTERS) with the power to defeat the werewolves is the only hope when the horde of hairy beasts lays siege to the community.

From The Asylum that brought you SHARKNADO and Z NATION comes a new kind of hero and the perfect mash-up for a time when the superhero genre has dominated our media. This is most definitely an origin story and the first chapter in what could be a fun saga; the character was even developed, appropriately enough, via comic book artwork, so the DNA is definitely there. And yes, although we tend to focus on zombies around here, all horror is fair game and our titular titan is in fact a species of zombie – a really cute, sentient, and troubled sort akin to iZOMBIE‘s Liv Moore. So it’s all good!

It’s refreshing not to have Samantha leap in and pummel werewolves without any trouble. Her ultimate nemesis, the new Den Mother, is an imposing foe and not one that’s easily dispatched; this is going to take work, and before victory there is heartrending loss. As for the villain’s visual appearance, Mother may not be up to blockbuster CGI standards, but that’s to be expected.

The perfect mash-up for a time when the superhero genre has dominated our media; an origin story and the first chapter in what could be a fun saga.

Speaking of which, when a movie like this has obvious limitations, it has to rely on aspects of production like writing and performance to buoy the proceedings, and with a mix of earnest acting and nice quips, there’s no problem there. Balfour – whose hair product is a stellar co-star – provides a solid central presence and has nice rapport with the pint-size co-stars playing his kids; I also have to respect a man that runs on coffee. His participation is also appropriate given the movie’s BUFFY-esque nods. Patrick Muldoon has some funny moments (guess that brain sucking in STARSHIP TROOPERS didn’t affect him too badly), and Romeo Miller offers strong support as Samantha’s devoted boyfriend; he also gets one of the best meta lines when he notes that being in a “scary movie…doesn’t work out for me.”

There are effective and even dizzying camera moves, atmospheric forest and cavern settings that suit the tale’s folklorish origins, and propulsive opening and closing themes by composer Chris Cano that sell the superheroic motif. If I had one criticism, it’s that Samantha is a cipher; we never see what she was like before her resurrection. A bit of her normal life prior to her transformation – her life at school and with Danny – would have grounded her character that much more and given her transformation the extra touch of tragedy that usually accompanies the rise of a hero. However, once things get hairy (sorry), she’s more than capable of keeping you interested in her exploits.

There are effective and even dizzying camera moves, atmospheric forest and cavern settings, and propulsive opening and closing themes.

The movie also does a nice job of hitting all the familiar ’50s sci-fi beats – a small town under attack by a scourge from the (super)natural world, a dash of environmental commentary, local law enforcement discussing science and analyzing maps, and plucky young heroes. The fun and furry mayhem of LITTLE DEAD ROTTING HOOD is best summed up by star Bianca Santos herself, who in a behind-the-scenes interview refers to it as “zombie apocalypse slash werewolf fighting amazingness.” So where do we go next? Might I suggest a trip to the big city in LITTLE DEAD ROTTING HOOD 2: MOON OVER MANHATTAN? And while I can’t offer any proof, I’m happy that I pegged the identity of the main monster near the beginning. So watch for clues!

The Z NATION team heads to Roswell, New Mexico, where they may find out that there are even more dangerous things than zombies…like zombie aliens?! And while they’re learning that the truth is out there in “RoZwell,” Arnold and Scott talk with the show’s Co-Executive Producer Dan Merchant, most recently doing triple duty as the writer and director on the previous episode, “The Collector!” It’s strange frequencies and stranger encounters in this all-Z NATION episode!

LISTENER CHALLENGE! Did we catch all the references and homages packed into “RoZwell?” Post in the comments here or at our Facebook page and let us know if we missed any!

VOICES IN THE DARK: LAST MAN ON EARTH Full Feature-Length Audio Commentary by Arnold and Scott!