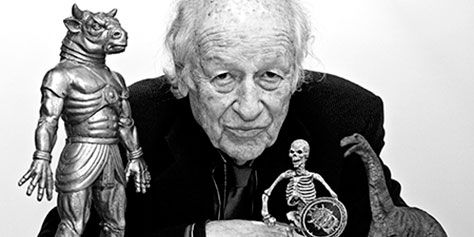 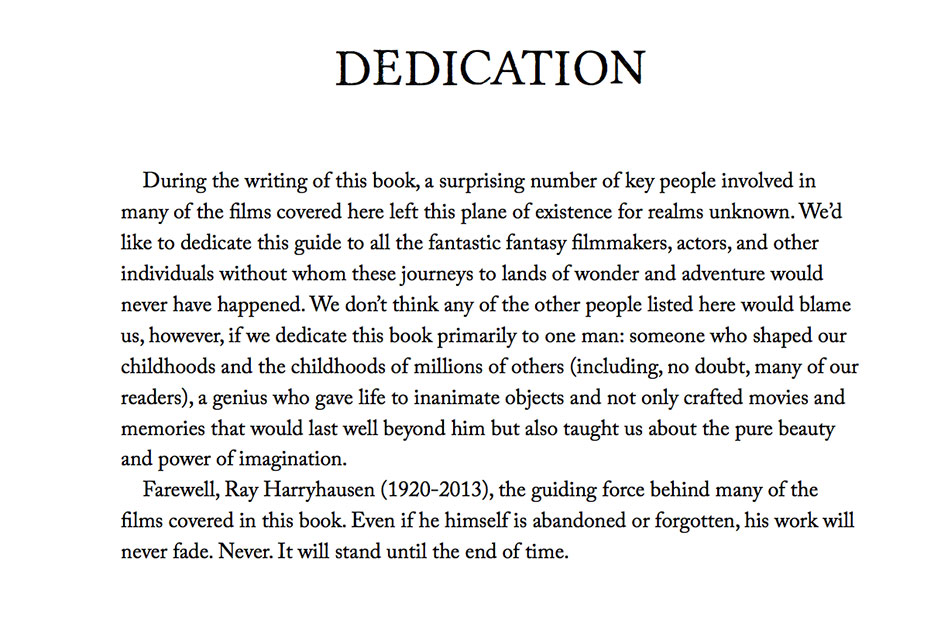 Way back in 2011 (what we sometimes refer to as “The Time of Legends”), when my co-author Arnold T. Blumberg and I first started designing the tome that would eventually become CINEMA AND SORCERY: THE COMPREHENSIVE GUIDE TO FANTASY FILM, there were a couple gaming-focused sections I insisted we include in each of the 50 detailed chapters. One of these, titled “This Year in Gaming,” would offer a little game industry history regarding the film’s year of release, while another, “Take Up Thy Sword,” would present information about a specific monster, item, location, character, or weapon that appeared in the film with just enough material to allow a particularly adept game master to lift it from the pages of the book and drop it into his or her campaign.

Presented here are five of those 50 entries. Most are fairly obvious choices, at least one might surprise you, and one other may be from a film from the early ’80s that slipped under your radar. It is our hope that readers of our book will be inspired to seek out some of these movies, even those we might not have spoken of very highly. Just because we consider one film to be a total stinker doesn’t mean you won’t find it a laugh riot worthy of a drunken movie night with a few friends!

For a variety of reasons, we opted to avoid specific references and names for the things described in the actual book, but for this article, I’m throwing aside that veil of cinematic secrecy! 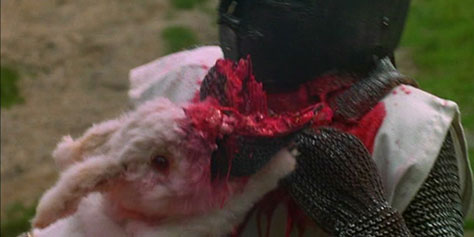 (Monster) Due to its diminutive size (and its lightning-fast speed), the rabbit is a difficult target to hit. When the killer rabbit attacks, a critical result decapitates any foe of up to medium (human) size, regardless of type or quality of armor. Even the rabbit’s regular attack inflicts twice as much damage as that of a typical longsword.

The killer rabbit is not worth screwing with. Employed by various madmen and ill-tempered beasts throughout the ages, the rabbit is quite possibly the greatest guardian that ever lived. It’s fast. It’s vicious. It’s cute as a wee little button. Know this: if ye be brave enough to challenge it, you’ll need a spare suit of armor—unless, of course, you lose your head! 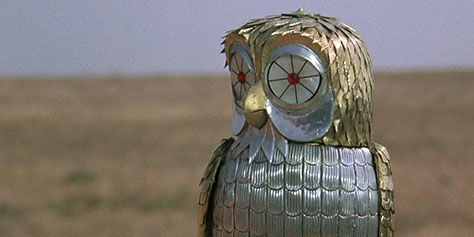 (Divine Construct and Mechanical Familiar) Constructed by Hephaestus as a mechanical replacement for the goddess Athena’s flesh-and-blood owl, this device is an all-seeing and all-knowing divine automaton. As a gift of the gods, the owl can communicate with anyone to whom it is bound, as if hearing and speaking the same language. (To all others, the automaton sounds as if it emits a series of whirs, buzzes, and clanks.) The owl can provide information (transmitted directly from the gods) and can scout when stealth (or a diminutive reconnoiterer) is required. The owl is either a familiar or a companion. 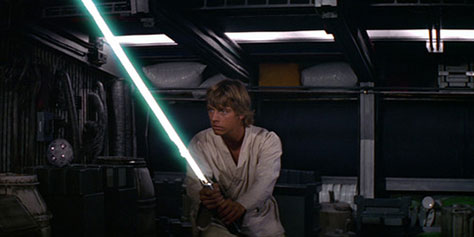 (Magic Weapon) While inactive, this rare weapon resembles a bladeless hilt. When energized (a standard-use magic-item action for unskilled wielders), it appears as a sword-shaped beam of light. Depending on which crystals the wielder employs to focus mystical energies, the generated “blade” of the weapon can vary in hue. Emerald green and sapphire blue are common within one order. Antagonistic sects typically wield ruby red.

In the hands of wielder not specifically trained in its use, the Saber behaves as a longsword. In the hands of a skilled knight of a dedicated order, it behaves as a rapier in regard to weight and speed, with a damage rating twice that of an ordinary rapier.

A knight with particular sensitivity to the relevant magical forces can wield the Saber without penalties for weight or speed, because the weapon becomes a supernatural extension of mind and body. The knight can also energize or deactivate the weapon as a free action. Such sensitivity also negates the potential for critical fumbles and personal injury. If crafted by the wielder—a feat best left to those with significant experience—the Saber gains slight bonuses to both attacks and damage.

When the weapon is in its active state, its glow provides light akin to that of a torch and thus betrays the presence of a wielder attempting a stealthy approach. The weapon’s constant emission of a low, otherworldly hum also jeopardizes such clandestine operations. Lastly, the blade generates incredible heat, so it can ignite flammable materials and instantly cauterizes any wound it causes. 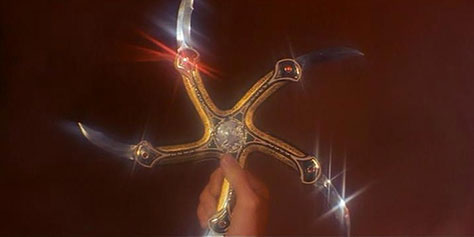 (Magic Weapon) An ancient item of unknown origin, this artifact is a formidable magical weapon in the hands of the right person. Weighing roughly two pounds, it possesses the power to strike an enemy or enemies and return to its wielder.

In its neutral state, it appears as a bejeweled, five-pointed star: a sort of golden starfish. When activated, two-inch blades spring out from the end of each spoke. The star’s wielder throws it at the target in a spinning motion—a ranged missile attack. It returns after each throw unless the attack roll is a critical success or a critical failure, in which case the weapon either remains stuck in the target, inflicting significant damage, or falls to the floor, unmoving. The wielder can then recover and reuse it as usual. 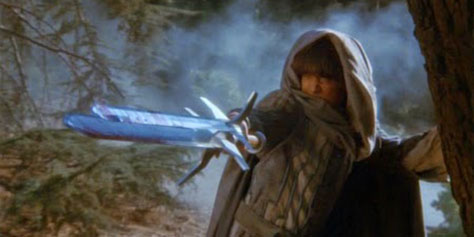 The Tri-Bladed Sword from THE SWORD AND THE SORCERER (1982)

(Magic Weapon) In the hands of someone of lesser strength or skill, the tri-bladed sword is an unwieldy beast, weighing as much as a two-handed sword when all three blades are present. Thus, a median penalty applies to all melee attacks. Someone with the skill—and superior strength—can use it to deal damage equivalent to that of a broadsword.

Two spring-loaded flanking blades are what make the tri-bladed sword special. The wielder activates them by depressing release catches positioned on the grip just below the cross-guard. When launched, the blades rocket through the air and can strike targets up to fifty feet away, each inflicting damage equivalent to that of a two-handed spear. Once both blades fire, the remaining center blade functions as a standard longsword. Lastly, the wielder can withdraw the grip from the base of the central blade, revealing a short sword…ideal for sneak attacks!

As for the weapon’s enchantments, it magically regenerates its missing blades…over a significant period of time: hours or even days. Also, this regenerative force expands into the body of the weapon’s owner, with a healing energy capable of curing minor wounds per the game system’s equivalent healing spell.