Who ya gonna…OK, OK, everyone does that. But the G2V Guys are already racing to the scene in Ecto-1 to offer their take on one of the most controversial summer blockbuster releases in recent years, the GHOSTBUSTERS reboot! Scott and Arnold talk paranormal phenomena, proton packs, prejudice, and much more as they not only review the film but discuss their memories of the original and the massive social media activity the movie has inspired! So get ready, because they ain’t ‘fraid of no…all right, fine, stopping.

Over the July 4th holiday weekend, I was honored to be a program participant at the Westercon convention, an annual literary science fiction convention that travels around the western states from year to year. For 2016, Portland OR won the bid to host Westercon 69, which was convenient for me since I live just a few minutes’ drive from downtown!

I sat on a few panels, including one near and dear to my heart titled “The Wild and Wonderful Weird West” that took place from 6-7pm on Saturday night (July 2nd). My esteemed co-panelists and I discussed everything from real Old West history to THE WILD, WILD WEST (TV series and motion picture), BACK TO THE FUTURE PART III, gaming, and of course the late and very lamented series, THE ADVENTURES OF BRISCO COUNTY JR., starring the one and only Bruce Campbell!

The panel runs just under an hour and I hope you all enjoy it!

If you would like to hear more of this kind of thing, please let me know via Twitter: @sawoodard or E-mail: <contact@g2vpodcast.com! 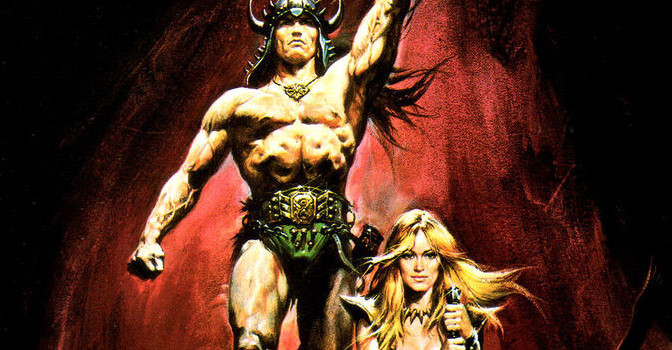 Scott and Arnold have been hinting at this massive project for years now on social media, but at last the tale can be told – a tale of high adventure and triumph and watching tons and tons of sword and sorcery movies while taking copious notes!

Coming from RPG publisher Green Ronin (Fantasy AGE, Titansgrave, A Song of Ice and Fire) in electronic form and now in print starting today, July 1, 2016, CINEMA & SORCERY: THE COMPREHENSIVE GUIDE TO FANTASY FILM is a massive 400+ page tome by Arnold T. Blumberg and Scott Alan Woodard covering the entire history of the sword and sorcery genre from its earliest beginnings to the latest blockbuster releases!

50 films are given in-depth chapters with details on plot, production, soundtrack, and detailed ruminations and reviews, while every other sword and sorcery feature-length film in existence is catalogued in a massive index cross-listed with alternate titles! PLUS: Tips on how to adapt characters, creatures, artifacts and more from your favorite films to YOUR gametable!

The project started many years ago from a simple conversation between the two pop culture experts, and now they’re bringing their love of cinematic high adventure to you!

“For me, the joy of working on these kinds of books is sharing that passion about film with fellow fans,” says Arnold (The “Doctor of the Dead” and co-author of ZOMBIEMANIA: 80 MOVIES TO DIE FOR). “These are movies we all grew up enjoying, and we hope that when you watch them next, you’ll take a look in our book and see what we have to say about them. It’s the next best thing to us sitting there and watching with you!”

“I grew up watching these movies and I grew up a gamer,” says Scott (G2V Producer, THE SIXTH GUN ROLEPLAYING GAME, DOCTOR WHO: THE JUGGERNAUTS). “Not only am I excited to share with other fantasy fans the best and absolute worst the genre has to offer, but also to give them ways to enhance their gaming experience with their favorite fantasy icons the same way I do.”

Get a preview by learning from Scott how to add some movie magic to your role-playing campaign!

Scott and Arnold beam up to an alternate reality and shield their eyes from the lens flare (no, that will never get old) as they prepare to dive deep into the action-packed reinvention of the venerable STAR TREK franchise that some have dubbed “Abramsverse Trek!” So grab some beer, fill up the engine room tuns, rev it up to Warp Factor Whatever, and set phasers to “doesn’t transwarp beaming and magic blood ruin everything?”

Oh, and do we need to warn you that since we discuss both movies in depth, there’s a spoiler storm ahead akin to an asteroid field or a Mutara Nebula made entirely of spoilers? So now you know.

NOTE: We had another technical glitch, with some of Arnold’s audio making him sound a bit drunk (he doesn’t even drink!), but it’s yet another lesson learned for next time – remember to kill all background backups!

ALSO: Be warned, voices are raised a few times – maybe it’s just because of how much we care. Ultimately it’s all a result of us having a great time doing the show!

SHOW LINKS:
What’s the future of Star Trek after “Into Darkness?” (io9.com)

RedLetterMedia – Mr. Plinkett: Star Trek Into Reference (we didn’t talk about this in the episode, but it’s worth it!)