IVAN VAN NORMAN (Game Developer, “King of the Nerds” finalist) joins Arnold and Scott to talk about the Kickstarter for the Outbreak: UNDEAD 2nd Edition Starter Kit! A “Zombie Survival RPG” that provides flexible play for placing characters into a wide array of apocalyptic scenarios, Outbreak: UNDEAD is a must-have for zombie and gaming fans eager to try out their own survival skills in a world of the walking dead! Ivan also talks about his recent “Dread”-ful battle on TABLETOP with Wil Wheaton!

While Wil Wheaton’s TableTop series for Geek & Sundry has you covered for boardgames (and we talked about that very show with associate producer Boyan Radakovich two episodes back!), it’s time to turn our attention to RPGs. Dom Zook joins us to talk about the web-based series Saving Throw, and how they hope to become for roleplaying what TableTop is for boardgames! It’s a lively chat about the joy of playing games and playing a character other than yourself – time to roll your D20!

Tabletop games are more popular now than ever before (for proof of that, listen to our podcast episode featuring special guest, TABLETOP associate producer Boyan Radakovich). For decades, publishers have released media tie-in games to keep the adventures going beyond the page or screen. These have included the rather unusual (and perhaps completely unnecessary), like ARCHIE BUNKER’S CARD GAME (1972); the surprisingly awful, like the Harry Potter tie-in, QUIDDITCH: THE GAME (2000); or the truly magnificent, like Reiner Knizia’s cooperative masterpiece LORD OF THE RINGS, also from 2000. This time around, we’re blasting off to explore three genuinely great tie-ins, all of which are set…IN SPACE!!! 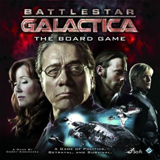 BATTLESTAR GALACTICA: THE BOARD GAME (2008)

With a television series that surprised most people due to its dark and decidedly adult tone – a dramatic shift from the family-friendly adventure show from the 1970s that inspired it – SyFy’s reboot of BATTLESTAR GALACTICA was a big success for the network. The ongoing guessing game – who is human and who is Cylon – was one of the more interesting aspects of the glossy series that ran for an impressive four seasons, spawning a couple spin-offs as well. It seemed inevitable that the series would inspire a tie-in game or two, and thanks to Fantasy Flight Games (makers of ARKHAM HORROR and the aforementioned LORD OF THE RINGS), BATTLESTAR GALACTICA: THE BOARD GAME was released in 2008 to much fanfare! This mostly cooperative game has the players all working together to help the Galactica reach Earth; however, there are traitorous Cylons in their midst stealthily played by their fellow players! With multiple fronts to manage, Cylon raiders to dispatch, turmoil within the fleet, and potential traitors at every turn, BATTLESTAR GALACTICA is truly one of the most original gaming experiences out there and well deserving of its high rank on BoardGameGeek. Like most successful games, especially those produced by Fantasy Flight, this one has spawned a few expansions and all offer interesting variations for you to explore.

Though it only lasted a single season, FIREFLY has never managed to escape from the public consciousness. There was the big screen adventure SERENITY, comics, toys, and of course a few games includin’ role-playin’ games from Margaret Weis Productions and the recently released FIREFLY: THE GAME from Gale Force Nine, a company known primarily for their wargame and RPG miniatures accessories. A fancible production featurin’ a large board, a peck of cards, play mats, paper currency, counters, and a handful of detailed ship minis, FIREFLY: THE GAME sends the players out into the black to assemble their crews, maintain and upgrade their ships, drum up work, and avoid both the Feds and them dreadful Reavers. While you’re lookin’ at upwards of four hours for a complete game, there’s a lot of excitin’ stuff happenin’ that will keep most anyone happy at the game table! As of writin’, there are a few supplemental items out there includin’ a bunch of promo cards (con giveaways, etc.), and one boxed set (BREAKING ATMO) that adds 50 shiny new cards to the core game; an additional expansion set is expected soon. Though it ain’t no Chinese Checkers, FIREFLY: THE GAME is an A-grade bang-up shindig worthy of a gander!

Most of us that were raised on STAR WARS grew up imagining ourselves in the cockpit of an X-Wing fighter during the Battle of Yavin or behind the controls of the Millennium Falcon. Now, once again thanks to Fantasy Flight Games, you can do just that with the STAR WARS X-WING MINIATURES GAME and expansions. The core set will provide you with everything you need for a few simple battles, including one X-wing fighter and two TIE fighters, but once you see the absolutely gorgeous pre-painted miniatures, you’ll want to sacrifice a few meals to start constructing elaborate fleets! At the moment you can buy more X-wings, more TIE fighters, TIE bombers, A-wings, B-wings, Y-wings, Lambda-class shuttles, Rebel Transports, Slave I, and yes, even the Millennium Falcon! Expect to see this game being played at your local game shops and conventions, and may the Force be with you!

The G2V Guys welcome Boyan “Bo” Radakovich – associate producer of the hit Geek & Sundry web show, TableTop, starring Wil Wheaton and a rotating assortment of celebrity guests – to talk about the making of the series, the upcoming Second “International TableTop Day” taking place around the globe, and the shared passion for gaming that has turned the hobby into a mainstream pursuit now enjoyed by more people than ever before. Roll the dice, make your move, and listen as the Face of Bo tells all!

Game Board! (From the IT Crowd finale)