An overworked fund manager takes his daughter by train to visit her estranged mother, only for them to get caught up in a zombie apocalypse as a viral outbreak turns nearly everyone into hyperkinetic bite-happy maniacs. Can a group of diverse train passengers band together to make it to the end of the line…alive? 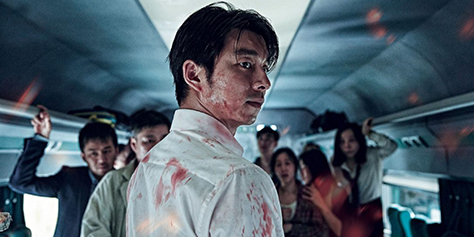 This is director Sang-ho Yeon’s first live-action production, having worked in animation to this point; in fact, he returns to that format for a prequel to TRAIN that sets up the apocalypse seen in the film. SEOUL STATION arrives in August, and I for one cannot wait to see this world expanded in that new chapter. And why? Because this is quality epic summer blockbuster storytelling, with a pitch-perfect mix of strong characterization, thrilling set pieces, deft emotional touches, and polished camera work. While I don’t feel it’s always warranted to compare a film to another (that’s too easy a trap to fall into, praising one thing by denigrating another), I did find myself thinking of WORLD WAR Z quite a bit. And at the risk of falling into precisely that trap, I’ll note that the difference between the two is that TRAIN TO BUSAN is very good indeed.

The standout performance comes from Dong-seok Ma as a working class husband with a baby on the way and a heroic heart of gold, whose natural ability to care for others enables him to teach our hero a lesson in empathy. But truly everyone in the cast is superb and makes you instantly care about them (or, in the case of one character, feel an appropriate level of loathing for him). From teen lovers to aging sisters, there’s a satisfying range of backgrounds and personalities thrown together in the midst of tragedy, and yes, you will feel some losses like stabs in the heart – a tribute to all involved in this production.

You will feel some losses like stabs in the heart – a tribute to all involved in this production.

As for the zombies themselves, the makeup effects are excellent if not too elaborate, and the related CGI is similarly very effective except very briefly in one key scene set in a train station. Behaviorally, they’re an intriguing blend of Western and Asian tropes, with their jerking, body-bending, frenetic movements and hissing attacks familiar from Asian horror while their swarming behavior is very reminiscent of the aforementioned WORLD WAR Z. They are reanimated running zombies but not flesh-eaters per se, as they only seem interested in biting just enough to spread the infection but don’t consume their victims. The most intriguing element is their disproportionate reliance on sight as a means of identifying victims. Although they also respond to sound and movement, staying out of sight is the primary way to defeat them, leading to some very clever strategic gambits on the part of our heroes to evade danger. 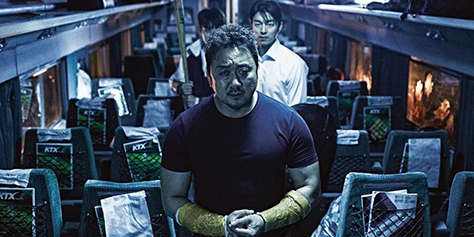 If I had any criticisms, they’re minor. Perhaps the only one worth noting at all concerns the opening gag in which we first see the zombie effect take hold via a reanimated deer (an identical bit is also seen in SCOUTS GUIDE TO THE ZOMBIE APOCALYPSE). This scene promises a subplot that never materializes, since we never see any zombie animals again. Something involving, say, an infected pet on the train might have added another dimension to the already excellent proceedings, but then again, why worry about what might have been? There’s so much here that works well, zombie pet or no zombie pet.

Perhaps the film’s greatest strength is not just that it fully and capably embraces the genre’s use of a zombie apocalypse to reflect meaningfully on human nature, but that it does so at a time when its specific message could not be more important or impactful. The primary villain in this movie is a self-interested narcissistic businessman that sees all other human beings as pawns, manipulating them through ignorance and sowing fear, then throwing them to the wolves as he seeks to protect his own worthless existence. As for the heroes, they only manage to save those they love by exhibiting empathy and recognizing that they are #StrongerTogether.

The heroes only manage to save those they love by exhibiting empathy and recognizing that they are #StrongerTogether.

And when the propulsive music kicks in and our last few survivors try to ride a train engine to an uncertain future while a growing horde of zombies begin to drag behind it, I defy anyone not to feel their pulse pounding. This is excellent action-packed movie-making that American film makers could learn from, but I’d be happy just to see more Korean movies make their way into our theaters…especially zombie movies!