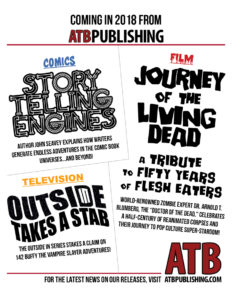 The staff of ATB Publishing just returned from a very successful weekend at LONG ISLAND WHO, where we had our physical launch of both RED WHITE AND WHO and OUTSIDE IN MAKES IT SO!

But another thing that ATB released was a surprise sneak peak at the titles planned for 2018, including the next installment in the OUTSIDE IN series and a couple other new projects! If you weren’t able to make it to L.I. Who, we’ve posted the preview page here. Stay tuned, lots more exciting pop culture non-fiction on the way from ATB in 2018!