We’re very excited to announce our latest foray into the vast universe of DOCTOR WHO, a series that will do for the WHO novels what the first two OUTSIDE IN volumes did for the television show! An episode guide to a series of episodes that never were, the BOOKWYRM books will offer trivia, thematic discussions, plot holes, continuity notes, reviews and much more in a cheerful and entertaining style. The first volume covers all 61 New Adventures novels. And what were the New Adventures?

From the time DOCTOR WHO vanished from television screens in 1989 to its first return with the Paul McGann telemovie in 1996, the saga continued in print via a series of New Adventures novels. For many fans, this was the official continuation of the story that had ended with Ace and the Doctor walking into the sunset, perhaps never to be seen again.

All these years later, the New Adventures (or NAs) have defined Modern DOCTOR WHO in many ways. Russell T. Davies was a huge fan and wrote for the range, while Steven Moffat contributed short stories. Other contributing DOCTOR WHO luminaries included Terrance Dicks, Andrew Cartmel and Marc Platt. It was also the first stepping stone for Paul Cornell, Mark Gatiss, Gareth Roberts, Kate Orman and Lance Parkin, among many others. The books themselves are regarded as a literary Golden Age for DOCTOR WHO; there is even a word that describes the way fans remember them – “NAstalgia.” And for those that never read them before, they provide an invaluable insight into where DOCTOR WHO was heading before and after its 2005 rebirth.

BOOKWYRM Volume 1 is serious and not-at-all serious, thoughtful and disrespectful. It’s accessible to newcomers that never read the NAs and equally informative to those who can tell you fifteen unknown facts about Paul Cornell.

Too broad and deep; that’s the New Adventures in a nutshell. Let the BOOKWYRM be your guide! Read on for comments on the first installment in the BOOKWYRM series from the people who know the NAs best (click for a larger version): 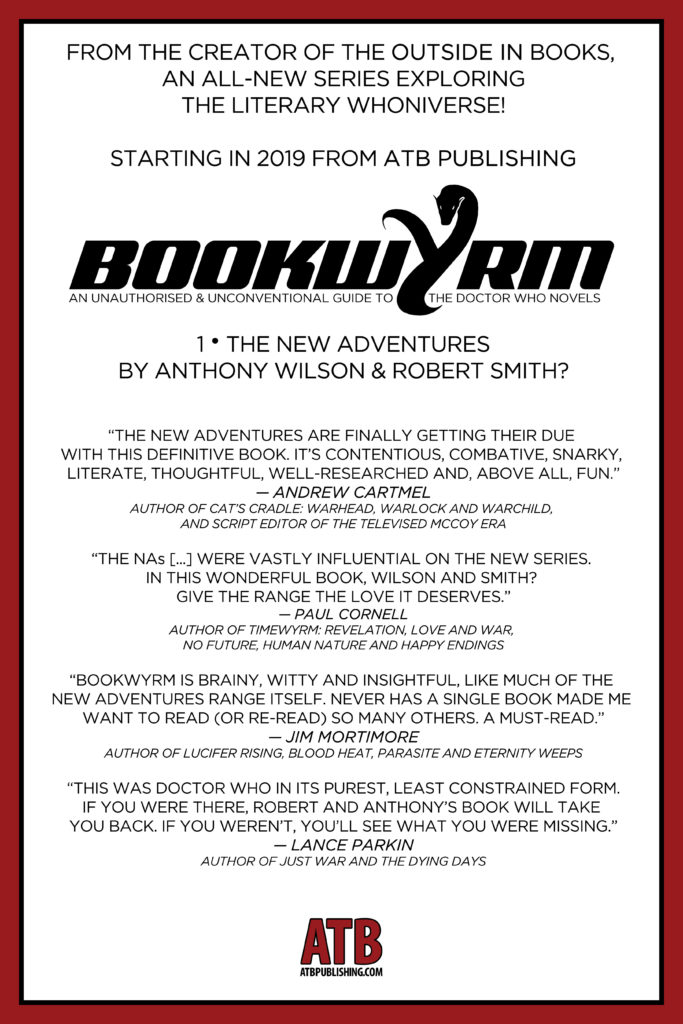