On this, Tom Baker’s 85th birthday, our own Arnold T. Blumberg shares some thoughts: 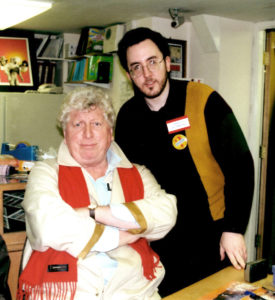 Every Doctor Who fan of a certain age probably has their own ‘I met Tom’ story. For me, meeting the man that defined the Doctor for generations of fans was inextricably linked with my first days as a publisher, way back in 2000.

The first edition of Howe’s Transcendental Toybox – a then-comprehensive guide to Who merchandise – was a joint venture between me (ATB Publishing) and David Howe (Telos Publishing), and our official launch took place at The Stamp Centre in London on the actual anniversary date of the show, November 23. In addition to me and David and stacks of the Toybox book, there was artist Chris Achilleos, Caroline John, Sophie Aldred, Elisabeth Sladen, (Carole Ann Ford, I think?), and, of course, Tom.

It was years before either of us would be a Curator, and I was just amazed to be meeting the Doctor in a setting where we were all signing books and collectibles together like peers. I was scheduled to do a signing right alongside Tom, and when it was over, I showed him a copy of the Toybox. He flipped through it, stopping at various pages and laughing (I can’t recall if he looked at the Tom Baker underpants during one of those laughs, but I like to think he did). And then we took the picture you see here.

Years later, we featured very kind comments from Tom on the cover of the Toybox’s second edition: ‘It puts everyone in the know…Competent and understandable…very valuable.’ But the quote we did NOT use was the one I will never forget, the one he said to me on November 23, 2000, right after flipping through the first edition Toybox and right before we took our picture together. He looked at me with that big teeth-and-curls smile and said:

‘Look at all these wonderful things I’ve never been paid for!’

From one doctor and former curator to another – Happy birthday, Tom Baker!