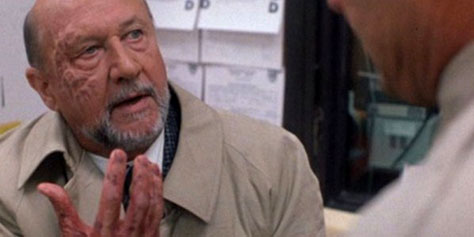 Jamie (Danielle Harris) is in an institution, and Loomis (Donald Pleasence, bless him) is now certain she’s in direct psychic contact with her uncle Michael. The Shape has been resting for a year, but as he prepares to hunt down his niece and ruin another Haddonfield Halloween, a strange Man in Black arrives. Both he and Myers sport identical triangular tattoos on their wrists; funny how we never saw that before. Who the hell is this guy?

In case you’re wondering where it started to go horribly wrong, here it is. One year after the successful resurrection of Michael Myers and the HALLOWEEN series with HALLOWEEN 4, they quickly cobbled together this follow-up. An ill-conceived attempt to expand the story by turning Michael’s rampage into a complex conspiracy with shadowy mystery figures left many a HALLOWEEN fan leaving the theater with one thought: “What the hell was that all about?” And just wait until the sixth movie! Join me now for those heady days of Thorn tattoos and men in steel-toed boots…

There were minor clues in the finale of the previous film to this psychic link Loomis keeps harping on, but it’s still a leap; then again, Loomis is never crazier than he is here, so let’s give him some leeway. As for Michael’s convalescence with an old man that takes him in, cares for him, and is then rewarded with a horrific death, it’s one of several sequences teased prior to release and savaged by editing. But we haven’t even begun to confuse you yet…

In case you’re wondering where it started to go horribly wrong, here it is.

We meet the latest horde of oversexed Haddonfield “high school kids” in their late 20s, including new heroine Tina (Wendy Kaplan), whose bubbly Jennifer Tilly impression sets her apart as a character with some energy for a change. She’s not your typical virginal slasher heroine, and she gets to participate in one of the best confrontations with the Shape in the series.

But this is still Jamie’s story. This film was blasted for depicting relentless violence and emotional torment directed at a little girl, but it’s to Harris’ credit that she makes it work. One of the most talked-about scenes involves Jamie convincing Michael to remove his mask, revealing a tear running down his face. Are we now to believe that trapped inside this demonic engine of destruction is a little boy who just wants to be loved? This attempt to add “depth” to our favorite psychotic slasher falls fatally flat. Speaking of that mask, it’s the worst one in the series, made more annoying by the fact that it’s supposed to be the same one he was wearing in 4 and yet couldn’t look more unlike that one if it tried (don’t even get me started on the Myers house).

The confusion is marginally relieved by the fannish satisfaction of finally watching Loomis beat the crap out of Myers with a board…with a nail in it!

Protected by a distraught sheriff (Beau Starr) and two moronic deputies who are so unbearably funny (not) that their every action is accompanied by goofy cartoon sound effects and bumbling music, the kids of Haddonfield are understandably doomed. Then Loomis stages a trap for the Shape, revealing knowledge of what drives Myers despite specifically stating in past films that he had no idea what was going on behind those black eyes. When did he come by this knowledge? The confusion is marginally relieved by the fannish satisfaction of finally watching Loomis beat the crap out of Myers with a board…with a nail in it! The gore goes up a notch as people are skewered, slashed, and stabbed in the face. And for the second time in as many years, the entire police force is massacred! Recruitment is going to get tough around there.

Then there’s the final scene with the machine gun-wielding Man in Black rescuing the corralled Myers, which doesn’t win the award for “Most Confusing and Frustrating HALLOWEEN Ending” only because HALLOWEEN 6 is yet to come. HALLOWEEN 5 posed many questions that failed to enrich the saga and that would also remain unanswered for years due to the poor performance of this lackluster installment. When the answers finally did come, they wouldn’t satisfy anybody…