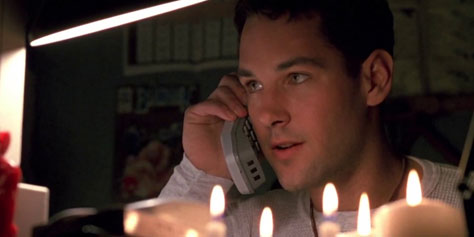 We learn that the night the Man in Black rescued the Shape, they also took Jamie with them! When she turns up again, she’s older (J.C. Brandy), pregnant by her uncle Michael (!), and on the run from a sinister cult that may have been behind Michael’s rampage since the beginning. As the movie implodes before your eyes, an aging Dr. Loomis (farewell, Donald Pleasence) meets Laurie stand-in Kara Strode (Marianne Hagan) and the original HALLOWEEN’s Tommy Doyle (Paul Rudd). The Thorn tattoos are explained – sort of – and the origins of the Shape and the Celtic cult that controls him are laid out in confusing partial detail. When the Man in Black is revealed to be a character from the original film with absolutely no logic to back it up, even the most die-hard fans will be hoping for another sequel to wipe away this hopelessly labyrinthine story and get back to basics. Fortunately…

Although the filmmakers didn’t know it, this installment was the end of the road for the increasingly convoluted but occasionally intriguing mythology built into the series beginning with HALLOWEEN 4. When this movie finally limped into theaters after some truly brutal editing, most moviegoers agreed that Michael desperately needed a very long rest, perhaps even a permanent one. He had already been absent from the silver screen for six years while the producers wrestled with the problem of digging themselves out of the hole they’d dug with HALLOWEEN 5, but this surely wasn’t the solution. Yet oddly enough, even as this represents the absolute nadir of the HALLOWEEN series, CURSE also contains some of the most touching tributes to the original film and a poignant though ultimately squandered final performance by Donald Pleasence.

Even as this represents the nadir of the series, CURSE contains touching tributes to the original film and a poignant though squandered final performance by Donald Pleasence.

At the time, I was looking forward to learning the secret of Michael’s evil, but sometimes you shouldn’t get what you want, and CURSE is a perfect case in point. While there are affectionate nods to earlier installments, including a beautiful bit with Tommy reliving a ’smashing pumpkin’ moment from his childhood and even a monologue from the elderly Mrs. Blankenship that recalls similar material from the otherwise unconnected HALLOWEEN III, the scientific basis for Michael Myers’ escapades rings hollow and cheapens everything that came before. Ultimately, the Thorn cult is an intriguing but woefully misguided addition to the mythos. And after all of this, viewers are still left with a plethora of unanswered questions and an ending so vague, surreal, and poorly edited that “ambiguous” doesn’t begin to cover the level of exasperation and rage audiences felt when Loomis moaned in agony and the closing credits rolled.

George Wilbur returns to play the Shape a second time, but since HALLOWEEN 4 he’s packed on a few pounds. And since Myers becomes an afterthought in his own series while everyone else runs around playing X-FILES, he gets very little to do. As for the mask – eh, not the worst it’s been, but not exactly a stunning re-creation either.

No matter what version you watch, HALLOWEEN 6 is a frustrating experience that promises much but delivers little.

Shortly after the film’s release, a “Producer’s Cut” surfaced via bootleg VHS copies circulated by fans, and while this curio was by no means a masterpiece, it was a much improved cut that not only enhanced the movie’s ties to the older installments but featured an entirely different final fifteen minutes that set up an even more bizarre cliffhanger that would never be resolved. It did manage to illuminate some of the theatrical cut’s ambiguity by pushing the conspiracy storyline toward a slightly more satisfying Celtic/magic explanation rather than a scientific one, and it also replaced Rudd’s opening narration with a more pleasing version recorded by Pleasence. The “Producer’s Cut” also clearly came down on the side of “less is more” by featuring far less gruesome murders than those seen in the theatrical version.

No matter what version you watch, HALLOWEEN 6 is a frustrating experience that promises much but delivers little. Most tragically, it serves as our less than dignified final encounter with the great Donald Pleasence’s Dr. Loomis.