Big Finish Productions, home of the licensed DOCTOR WHO full-cast audio dramas since 1999, recently released a new box set pairing four incarnations of the Doctor from the classic era of the show with monsters predominantly associated with the new post-2005 series. Overall, this collection of stories is enjoyable, serving as an excellent entry in the Big Finish DOCTOR WHO canon. 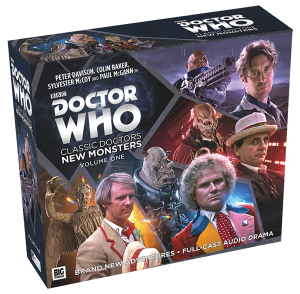 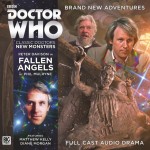 The first story in this collection features the Fifth incarnation of the Doctor (Peter Davison) in conflict with a trio of Weeping Angels. This story serves as a prequel to the TV episode “Blink,” both in terms of the plot and the way time is manipulated in the story; there are even a few lines of dialogue meant to remind the listener of that first appearance by the Angels.

In a box set with “Doctors” and “Monsters” in the title, we should expect a large focus on both; here, the Doctor obviously plays a large role, and so do the Weeping Angels. Considering the Angels are heavily reliant on the visual medium of TV – they become ‘quantum-locked’ when a character looks at them – I was concerned by how they would come across in audio. Fortunately, the sound cues and dialogue are effective in portraying the Angels.

The Doctor and his companions Gabby (Diane Morgan) and Joel (Sacha Dhawan) meet out of order, creating an interesting dynamic in terms of who has more information. The Doctor does remain in charge throughout, and although there are a few points in the story in which Gabby and Joel seem to be better informed than the Doctor, they aren’t in that position as often as I would have liked. Both are academics – Gabby is a physicist and Joel is a historian – in a gender-swapped nod to Ian and Barbara, two of the Doctor’s original companions in 1963. I enjoyed that reference, and I also appreciated the specificity of physics. Given the elements of time travel inherent in the story, I was excited to hear what was in store for a physicist interacting with the Doctor. Unfortunately, Gabby was shut down by the Doctor almost immediately when he told her that most of what she knows about physics is incorrect; I think an opportunity was missed for strong interplay between a physicist and the Doctor.

There was also some wonky psychology presented in the story. As a cognitive psychologist, I can be a little sensitive to issues of mispresented memory science, but here the information presented is suspect at best. It wasn’t as bad as the issue in the next story, but it left me shaking my head. There is a way to make memory loss and recovery work, but the reliance on folk science hinders the story. The ability to suspend disbelief is necessary in any DOCTOR WHO story – and truthfully in much of science fiction – but this pushed me past my threshold.

Minor quibbles aside, the story is excellent, and I look forward to more Big Finish stories featuring the Weeping Angels.

1.2 JUDOON IN CHAINS by Simon Barnard and Paul Morris 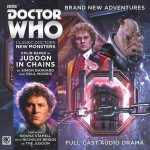 The second story features the sixth incarnation of the Doctor (Colin Baker) in a familiar setting – a courtroom. This time the Doctor is defending Captain Kybo (Nicholas Briggs), a member of the Judoon race. Similar to THE TRIAL OF A TIME LORD season, we have a story that starts in the courtroom and then flashes back to previous events.

The mix of courtroom drama, sci-fi outer space, and Victorian-era circus is an interesting mix, but I’m not sure it worked all the time. There’s a lot going on here, with elements of other stories like AVATAR as well as real-life events like the case of Edward Snowden (or, more generally, whistleblowing). For the most part, the story combines these elements well, but there are a few minor issues. The story might have been well served with a few extra minutes of expansion.

As with “Fallen Angels,” there is an issue with some basic pseudoscience. In one scene, the Doctor refers to activating the right hemisphere of the brain of a character, allowing that person to be creative. That combines two unfortunate neuro-myths: that we only use some small percentage of our brains, and that people can be right-brained or left-brained. This flaw does not ruin the story, but it is enough to take me out of it temporarily.

However, this story is worth your time, especially due to Colin Baker. The Big Finish audio stories have served Colin’s Doctor well in the past, and this story certainly allows for another excellent performance.

1.3 HARVEST OF THE SYCORAX by James Goss 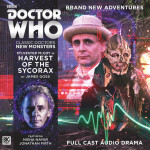 The third story in this box set features the seventh iteration of the Doctor (Sylvester McCoy) and examines a future in which the physiology of humans is constantly monitored by personal digital devices. Essentially, humans carry iPads with a constantly running WebMD app that gives them advice on which medications to take. This set up creates an interesting connection to the Sycorax, who manipulate humans via blood control. The Sycorax seek the data collected by the devices, allowing the story to examine Big Data and Big Pharma in a not-so-subtle allegory. Because of the story’s humorous approach, that aspect of the story works; at no point does it come across as overly preachy or critical.

Writer James Goss also does an excellent job of making this feel like a Seventh Doctor story. It features a strong female protagonist named Zanzibar Hashtag (Nisha Nayar) and a deceptive Doctor who manipulates the situation both to bring out the best in Zanzibar and to deceive the Sycorax. The story feels like it was written specifically for this Doctor, not for any other.

Unfortunately, the Sycorax are the weak link in the story. Similar to their characterization in their first TV outing, “The Christmas Invasion,” the Sycorax come across as unintelligent and, ultimately, unthreatening; they’re a little too “dude-bro-y” for me. I would have appreciated an expansion of the characterization of the Sycorax. It is especially glaring when heard alongside two stories (JUDOON IN CHAINS and THE SONTARAN ORDEAL) that flesh out two similarly two-dimensional monsters.

1.4 THE SONTARAN ORDEAL by Andrew Smith 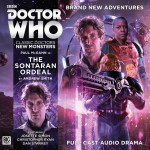 The fourth story in this set begins when a part of the Time War between the Time Lords and Daleks leaks out of the barriers containing it, with severe consequences for the planet Drakkis. Perhaps not surprisingly, this brings the Doctor (in his eighth incarnation as played by Paul McGann) and the Sontarans to the scene.

This story does an excellent job of re-establishing the Sontarans as a race. They are warriors, but science and politics still play a major role in their society. Some past DOCTOR WHO stories have trended away from showing the Sontarans as much of anything other than warriors, but this story shows them as a more three-dimensional race. Familiar voice actors who have previously portrayed Sontarans on TV are employed here, which gives them both an old and new feel; it also reinforces the differences between clone batches. The Sontarans are made more complex, with a great deal of autonomy demonstrated by the main Sontaran, Jask (Dan Starkey), and a fair amount of crossing and double-crossing between other Sontaran characters.

About twenty minutes into the story, there is an excellent interaction between Commander Jask and Sarana Teel that explains how the Time War has affected Drakkis. The scripting and acting during this sequence is fantastic, creating and clarifying the motivation for multiple characters. It also likely serves as an enticing preview for what we can expect from the upcoming Big Finish stories that will be set during the Time War.

One minor quibble with the story rests on an old trope, drowning in quicksand. The Doctor has to rescue Sarana from quicksand and mentions that thrashing around will only make her sink faster. Like the neuro-myths in earlier stories, I would like to see this trope disappear. With that said, this was the best of the four stories in this box set, and probably the best Sontaran story I have seen/heard.

In addition to the four stories detailed above, the box set includes an extended audio documentary with interviews and production information. Many of the larger releases from Big Finish include these extras, and they are consistently well produced. This one is no exception, so if you’re interested in this type of value-added material, you’ll be very satisfied with this one.

HELP US BY ORDERING THE BOX SET VIA THIS LINK!