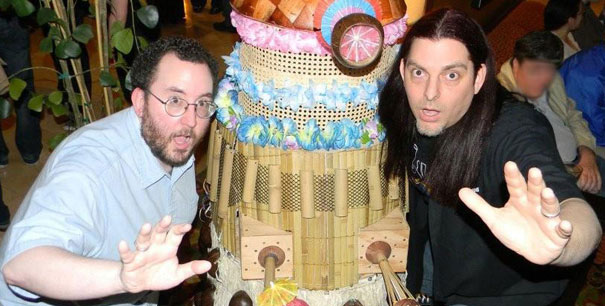 SCOTT ALAN WOODARD (on the right) is a Los Angeles-based writer, game designer, editor, and voice-actor. He is the co-author with Arnold T. Blumberg of Cinema and Sorcery: The Comprehensive Guide to Fantasy Film, the Brand Manager for the licensed Flash Gordon line of roleplaying products from Pinnacle Entertainment Group, and the author of The Sixth Gun Roleplaying Game (also from Pinnacle). His produced dramatic work includes War of the Elementals (Colonial Radio Theatre) as well as three official audio dramas based on the long-running BBC series, Doctor Who, and one play based on the classic American horror soap, Dark Shadows (all commercially available from Big Finish Productions). He has also won several Promax awards for his work as a TV and radio promo producer for Warner Bros. and Disney, and he has worked as a mechanical designer, fabricator, and puppeteer in the movie special effects industry (look him up on IMDb!).

ARNOLD T. BLUMBERG (on the left) has authored or co-authored a number of other books on film analysis and pop culture, including Zombiemania: 80 Movies to Die For, The Big BIG LITTLE BOOK Book: An Overstreet Photo-Journal Guide, and Howe’s Transcendental Toybox. He is the co-author with Scott Alan Woodard of Cinema and Sorcery: The Comprehensive Guide to Fantasy Film, and has also designed books including Zombiemania and the award-winning It Lives Again! He is the co-owner of ATB Publishing and teaches courses in zombies, science fiction, comic books, superheroes (including the world’s first course in the Marvel Cinematic Universe), and many other fun pop culture subjects at the University of Baltimore and the University of Maryland Baltimore County, prompting people to comment: “Where were you when I was in college?” And find him on IMDb too – Arnold has appeared in numerous zombie and horror documentaries like Doc of the Dead, The 50 Best Horror Movies You’ve Never Seen, and The Walkers Among Us!

NATALIE B. LITOFSKY grew up in Baltimore. She left her heart in Beijing. She creates in several dimensions. List of things she enjoys: Candid photography (scientific fact: food tastes better after it’s photographed); mashed potatoes; the IKEA catalogue, singing in the shower; public parks; reptiles; making you smile. She currently works in the Communications and Media Relations department for a government agency. She’s the former Web Editor at City Weekend Magazine. You can see more of her work and get in touch via her blog, positivelynatalie.com.

JACK ARNAL is a cognitive psychologist and former stand-up comic who lives near Baltimore, Maryland. Since he was very young, Jack has been interested in horror movies, superheroes, comedy, and psychology. His interests in pop culture and psychology have led him to teach courses on zombie science, Doctor Who and metacognition, and pranking culture at McDaniel College. When not studying human memory or torturing students by forcing them to learn about statistics, Jack can be found walking his dog and listening to Doctor Who stories from Big Finish – or attempting to watch all of Netflix.

BRANDON PATTON lives in Portland, Oregon with his girlfriend and their two cats. Not only has he worked at and/or managed four different GameStop stores across four different states, he also spent three years in the Xbox division at Microsoft and written articles for multiple gaming sites and blogs, including ThumBlister.com as well as Portland’s 750AM The Game radio station. Over the past 22 years, Brandon has sought out and viewed every available E3 press conference presented by every company in the industry, and he had the great pleasure of being invited to the show back in 2010. His absolute favorite gaming moment was playing host to Hideo Kojima during a Metal Gear: Peach Walker signing, followed closely by teaching Gary Oldman how to play MLB: The Show.